From its sources in the Northern Pindos mountains in Greece, the Vjosa / Aoos River enters into Albania and discharges into the Adriatic Sea. Along its meandering routes it creates landscapes of spectacular natural beauty and for centuries it has shaped the lives and traditions of the populations living around its basin.

Greece and Albania, the two countries traversed by the Vjosa / Aoos River, have joined hands in order to create this River Ecomuseum, an interactive museum that displays in situ the natural and cultural heritage and identity of this transboundary area. A museum without walls that tells the story of the interaction of people with the local environment as it has developed through the centuries.

The overarching goal of this Ecomuseum is to combine the past and the present providing simultaneously a path towards a sustainable future for the area; a future where the balanced co-existence of nature and culture will positively contribute to the livelihoods of the local population.

The Ecomuseum was created through extensive research and contacts with local associations, scientists, academics and the ordinary citizens of the area. It unfolds on four thematic routes, two of which are in Greece – Water and culture, Movement and routes – and two in Albania – Fruits of nature and Earth and Water-. By selecting a thematic route, the visitors are directed into a trail of discovery and exploration of the natural wonders, the history, the culture and the contemporary life ways of the people living around the Vjosa / Aoos river basin.

The “Vjosa / Aoos river eco-museum; promotion and protection of the natural and cultural heritage of the Vjosa / Aoos river basin (VAEcoM)” project were co-funded by the European Union and National funds of Albania and Greece under the IPA Cross – Border Programme “Greece – Albania 2007-2013”. The project partners were  MedINA (lead) and Pindos Perivallontiki in Greece and the Institute for Nature Conservation in Albania (INCA) and the Forest Directorate of Permet.

On the projects website (www.ecomuseum.eu) you can download the trilingual guide book, use the virtual tour to get a taste of the area and the thematic routes and learn more about the project. 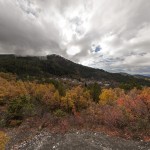