Every year they gather on the 24th and 25th of May for the pilgrimage, and also the third weekend of October as well. They camp on the streets, on the squares, on the beach, reunite with family and baptise their children in the Saintes Maries Church.

They are nomads, living an unconventional life, one that the rest of the society finds hard to explain. They don’t know what the next day will bring and they wouldn’t settle for anything less. They don’t own a single square foot they can call their own, they don’t join the military, they don’t get child benefits. They are scorned by many settled people. Many false stories and prejudice accompany them. However, these people fought on the battlefields and in the Resistance, and 300.000 of their brothers died in the Nazi death camps. On the other hand, today, especially in France they have woven a network of friends. Many people feel close to these misunderstood people, who have paid a very high price for their right to keep on existing.

The Gitans
Although in France the name “Gitan’ is given to all populations of gypsy origin, most Gypsies deserving this name belong to the most important group going to Saintes Maries de la mer. They used in the past to choose Spain as their country of preference. Although they have lived in France for many generations, it is this group that called themselves ‘Catalans’ or ‘Andalusian’ and have given to Spain the best of Flamenco, great dancers and toreros, and in France, a famous guitarist, Manitas de Plata.

The Roms
They keep their traditions, their language (which is close to Sanskrit), and their legends; the women continue to wear their long multi-coloured skirts and, for those who are married, the scarf around their heads. The women still tell fortunes, and their men are tinkers, coppersmiths or gilders. Because of their occupation, they often live in the suburbs of industrial cities.

The Manouches
They stayed for a long time in Germany, and their names testify this fact (e.g., Django Reinhardt). The poorest make baskets and continue to use their horse-drawn caravans, while others are fairground sellers or iron gatherers. They have a great passion for music and are the source of the virtuosos of the famous tzigane orchestras.

Their pilgrimage ceremonies continue to be the same since the Middle Ages. Sara, considered by the Gypsies as their patron saint, is an enigma to the historiographers. A Camargue tradition considers her to have been the servant of Mary Jacob and Mary Salome, the two Saintes Maries who, fleeing persecution in Palestine after the crucifixion of Christ, landed on the Provençal coast. Another story that is attributed to the Gypsies considers her to have been a Gypsy who settled on the Provençal shores and was the first to welcome the exiled women from the Holy Land. Where the Maries landed, a spring of pure drinkable water was found at the exact spot, something that was considered a miracle, given the fact that it is located only a few meters from the sea.

Saint Maries de la Mer village, located in the Rhône Delta, has been one of the holiest sites of the area for more than two millennia, hiding remnants of Egyptian, Greek, probably Roman and Christian temples.  In the 11th century, it was connected to the Santiago de Compostela pilgrimage route. The statue of Sara, Patron Saint of the Gypsies, found in the fortified Church of Saintes Maries de la Mer, is carried during a procession to the sea, on the May 24. The statue, carried by the Gypsies to the sea amid songs and praises, symbolises Sara’s waiting for the Saints. The next day, after a solemn mass, the statues of the Two Maries are taken to the sea, accompanied by the crowds of Gypsies and non-gypsy pilgrims, as well as ranchers on horseback and Arlésiennes girls in costume. The Bishop, on board one of the traditional fishers’ boats, blesses the sea, the region, the pilgrims and the Gypsies. The procession returns then to the Church, in the company of musical instruments and the set of bells.

“Saint Sara, set us on the right path, give us your beautiful luck and give us health. And if someone thinks bad of us, change his heart so that he thinks good of us. -Amen.-“ 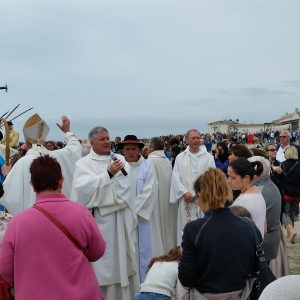 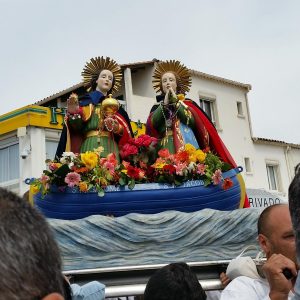 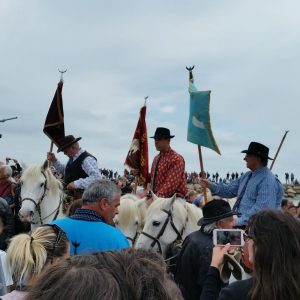 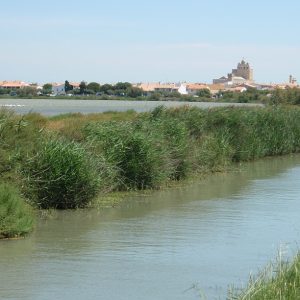 The village of Saint Maries de la Mair and its fortified church, view from the wetland, photo by J.M. Mallarach 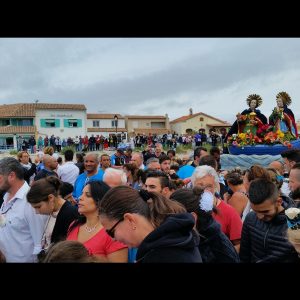 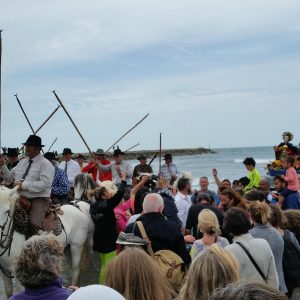 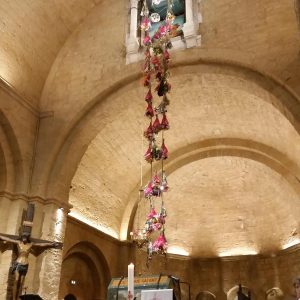 Inside the Saintes Maries fortified church, the Camargue, France, photo by M. Renaudin 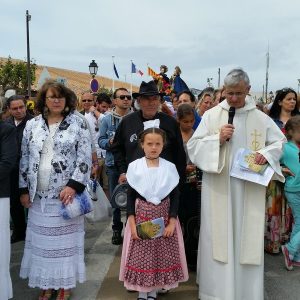 Gypsies and non-gypsy pilgrims during the procession to the sea, Saint Maries de la Mer, the Camargue, France, photo by M. Renaudin