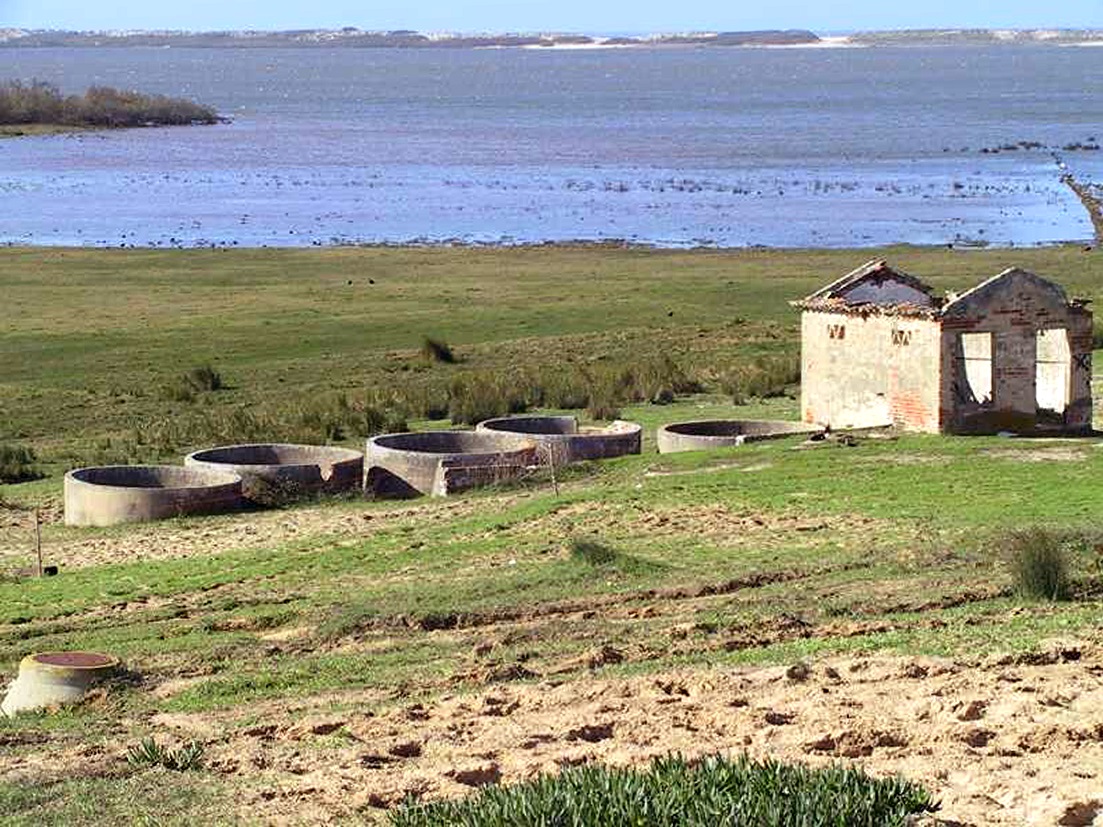 Lagoa de Santo André is situated on the southwest coast of Iberia, south of Lisbon and the Sado River. Highly significant from a hydrological point of view, its characteristic dense marshland vegetation considerably reduces coastal erosion. In addition, the lagoon helps preserve the underground water table in the immediate region. Varying seasonably in salinity and depth, it is separated from the sea by a narrow sand dune strip covered in scrub and Maritime Pine woods. The site’s vegetation coverage is relatively highly rated, rendering this remarkable habitat one of Portugal’s most significant wetlands. The lagoon supports a large number of breeding birds, reed-bed passerines as well as wintering birds en route to and from the African continent.

The region has been inhabited since prehistory. Settlements dating from the late Neolithic age have been located in the vicinity—excavations at Castelo Velho [Old Castle] have confirmed a human presence in the area and revealed a Neolithic settlement which was later fortified by the Celts (3rd -2nd centuries BC). A shrine to Venus and Aesculapius, the Baths and the Hippodrome testify to the site’s significance during the period of Roman rule. However, the Germanic invasions caused the settlement to severely decline in the 5th century AD. The Moors, who later occupied the area, built a new castle on a hill opposite; known as Cacém, it was later taken by the Knights Templar, one of a wave of Christian invaders which included the Byzantines, the Order of Santiago and the Dukes of Aveiro before the area finally passed to the Spanish Crown. The nearby fortified town of Sines with its medieval castle is the birthplace of Vasco de Gama, who sailed eastwards to India in the 16th century, circumnavigating Africa and the Cape of Good Hope. The city’s archaeological museum displays some remarkable jewellery which is probably of Phoenician origin.

Santo André Lagoon has always been an important source of fish, resulting in permanent settlements of fishermen and a very lively fishing tradition. Locals still construct their boats and nets in the customary way, as fishing techniques and traditions are passed down from the older to the younger generation.

Agriculture and cattle breeding are also still practiced in the region, though not to the same extent. Among the population, traditional knowledge of viniculture and rice production is widespread. Water mills are still functioning and rice milling technology is practiced. Locals have always found ways to transform their environment, constructing and maintaining sluices, ditches and dams. They also erect straw huts around the wetland.

The region’s local culinary traditions are one of its attractions and include fish and eel stews, game dishes, pork, fried bread and coriander soups.

Religious traditions are also well-preserved and numerous rites are performed including the ceremony ‘linking the sea to the lagoon’, the worship of St. Andrew and St. Peter, and the Santo André fair.