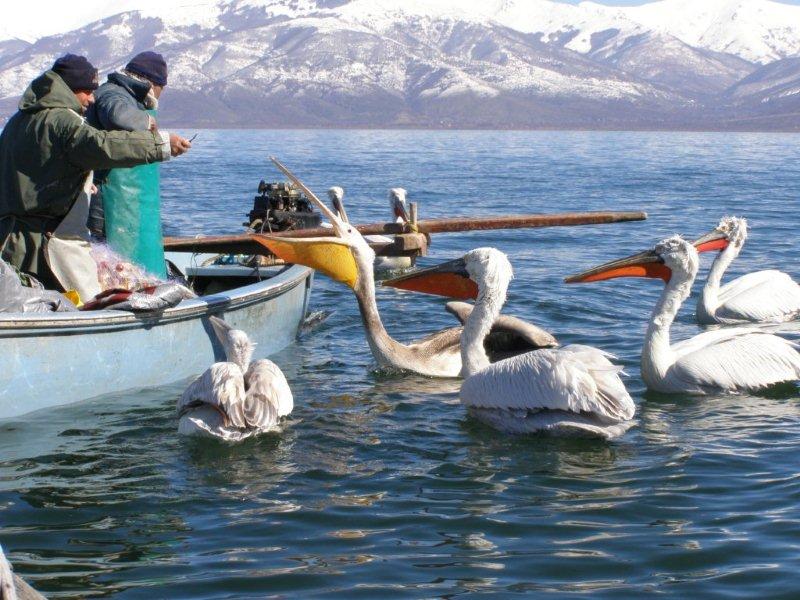 Prespa is a complex of two lakes shared between Greece, Albania and FYR of Macedonia. Encircled by a ring of tall mountains, the lakes form an iconic landscape. Due to the region’s isolation, antiquity, climatic conditions and geomorphologic characteristics, it is home to a rich biodiversity and many rare and endemic species. The wetland area and its surroundings support an impressive number of plant species and provide a feeding and breeding habitat for a large number of bird species including a large pelican colony. The area is also an important stop-over for many birds during their spring and autumn migrations. Prespa Park, the first transboundary protected area in the Balkans, was established in 2000.

Earliest archaeological finds date back to the Early Bronze Age. Prespa was ruled by the Macedonian Kings, the Byzantines, Bulgarians, Franks and Ottomans until the borders were fixed by the Treaty of Bucharest in 1913 and the area was divided between the three states. Many Byzantine and post-Byzantine monuments can be found in the region, including the basilica of Aghios Achillios (10th century AD), where the Saint’s relics were kept after they were brought here from Larissa by Czar Samuel. Across the border in the FYR of Macedonia, the small church of St. George in Kurbinovo is decorated with frescoes painted in 1191. Small hermitages are carved into the rocks on the shores of both lakes, which are also adorned with rock paintings.

Protected as they are by the surrounding mountains, Prespa’s people managed to maintain an almost self–reliant way of life until the 1960s. Fishing has always been a major economic activity and traditional boats—dug-out canoes—were in use until the late 1960s when they were replaced by punts (shallow hulls, used mainly in rivers). The most common fishing methods practiced were seine netting, long lines, gill and trammel nets (pezovola, characteristic of the region). Pelaizia is an ancient fishing method which is still used by the fishermen of both Mikri and Megali Prespa: traps are used to catch fish that nest around pelaizia or kedra—constructed piles of juniper branches. Traditional fishing is now almost extinct.

The rich natural resources of Prespa provide the ingredients for a number of traditional delicacies. The fertile soils produce a large variety of excellent beans, among them the well-known elephant bean, which is also called the “Prespa bean”. The area is also known for its red peppers, which are used dried or fresh in a variety of dishes. Fish from the lakes are also used in traditional recipes. Over the last decade, a large number of restaurants and taverns have opened in Prespa villages to welcome visitors who want to sample the local cuisine and delve deeper into the local culture.

The traditional Prespa architecture is quite distinctive. The local people have always used raw materials from the wetlands as well as stones from around the region to build their homes. Although restoration measures are in place, there is still a real danger of a deterioration in the local architectural character.

Although the Narcissus poeticus festival has been abandoned, the local people still organise folklore festivals. The Prespeia festival, which has taken place on the islet of Aghios Achillios in the middle of Mikri Prespa Lake for more than 25 years, is a very well-established institution which hosts exhibitions, musical performances and theatre shows.

Research and collaborative efforts with the local population have resulted in the people of Prespa making efforts to restore their former relationship with natural resources and use of traditional practices. Attempts to implement this have included the restoration of wet meadows. The Society for the Protection of Prespa (SPP) is a Greek NGO which is currently active in the region. The programs organised and implemented by the SPP include the restoration of two traditional buildings, the publication of booklets on the restoration of traditional houses, the promotion of traditional products and the establishment of the Prespa Centre for Nature and Anthropos. The information centres operated by the SPP and the Management Body provide environmental education to local schools and visitors to the area.