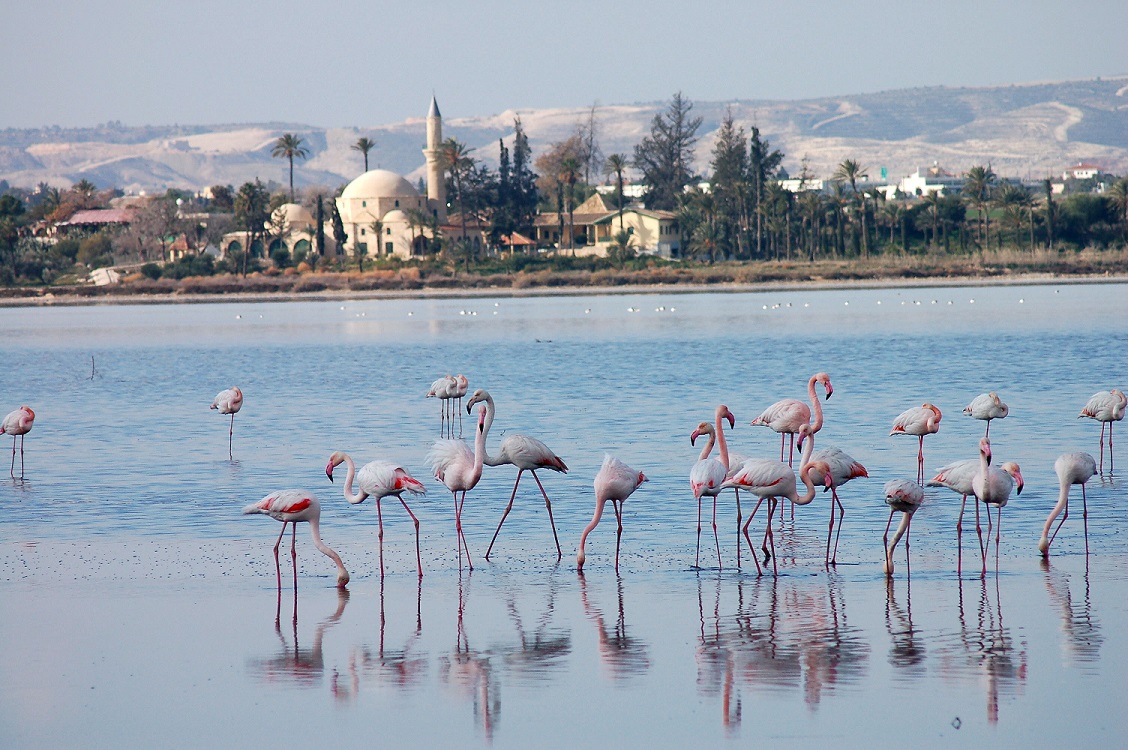 The Larnaka Salt Lakes, an area of 1761 hectares, are a unique Mediterranean landscape fashioned over thousands of years through the co-existence of humans and nature. It is a landscape that combines the natural beauty of the salt lake—and an ecologically important biotope—with a unique human heritage. The natural and cultural are closely intertwined around the lakes and the physical environment has been shaped by local traditional practices greatly influenced by the specific wetland. The Larnaka Salt Lakes are an impressive natural and cultural monument which encompass a protected wetland (a Natura 2000 and Ramsar site), important archaeological sites and traditional methods for harvesting salt. Together, these cultural and natural values reveal the bonds that unite people and nature over time.

There are two important archaeological sites in the broader area of Hala Sultan Tekke. The first is the prehistoric settlement near the Tekke. A cosmopolitan harbour town dating from the late Bronze Age (2nd millennium BC), it is one of the earliest known places of political organisation in Cyprus. Founded in this naturally sheltered anchorage, the ancient port town enjoyed a favourable location for commercial trading. The abundance of imported items from Mycenaean Greece, Minoan Crete, Anatolia, Egypt and the central Mediterranean attests to its wealth and prosperity and indicates the extent of its pan-Mediterranean connections. Excavations have brought to light a number of tombs containing lavish burial gifts. In addition to the rich tombs, excavations have also revealed parts of the flourishing settlement which once existed there and a town plan including residential compounds, a possible sanctuary and metallurgical workshops for the processing of copper.

A second important archaeological site was discovered during restoration work on the Hala Sultan Tekke in 2002, directly underneath the wing where male visitors and priests were hosted. The findings date back to the Late Archaic, Classical and Hellenistic periods: the figurines, inscribed local earthenware and large quantities of imported Attic red-figure pottery decorated with mythological representations indicate that the area was probably used as a sanctuary from the 1st millennium BC.

The Committee for the Protection and Management of the Larnaka Salt Lakes was established by ministerial Decision in 1997, and all measures and projects relating to the protection and enhancement of the wetland must meet its approval. Several projects designed to improve and restore the ecosystem have been carried out since, including the fencing off of certain parts of Lake Alyki in order to prevent vehicle entry and protect sensitive halophyte plants, the construction of two bird-watching towers, the removal of a shooting club that operated next to Lake Alyki, the regular cleaning of the wetland, an analysis of the water and substrate of the salt lakes and the removal of acacias, a foreign tree that negatively influences the development of endemic species.

Throughout the Middle Ages, and especially during the Venetian occupation, salt was so plentiful that it became one of Cyprus’ primary export commodities. Its harvesting and sale were strictly controlled and taxed. Apart from being an important nutritional additive, salt had a wide range of uses at the time in, among other things, food preservation, fodder production and manufacturing. Salt was last harvested from the Larnaka Salt Lakes in 1986.

The Um Haram shrine or Hala Sultan Tekke was built in 648 on the site where Um Haram died after falling off her mule during the first Arabic raids on Cyprus. According to tradition, Um Haram was a relative of the Prophet Muhammad. Upon hearing of her death, the Caliph Moavia, who led the Arab raids on the island in the 7th century AD, ordered the shrine to be constructed. Today, the Tekke is one of the holiest Islamic sites after Mecca, Medina and the Al-Aqsa Mosque in Jerusalem and an important place of Muslim pilgrimage. The Tekke has twice been restored, first in 1816 and later in 2002 by the United Nations Office for Project Services (UNOPS).