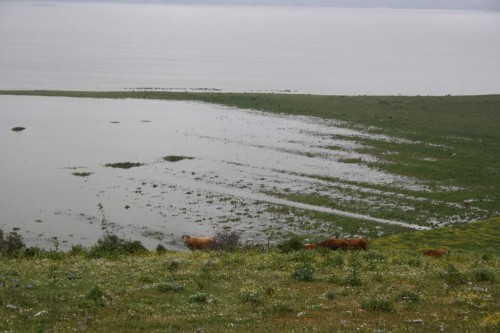 Lake Karla—located at the north-eastern part of the plain of Thessaly in Greece—used to be one of the most beautiful Mediterranean wetlands, with very high biodiversity and a lively culture especially in the local fisheries. Drained in the early 1960s to provide land for agriculture and to protect surrounding farmlands, it was re-flooding in recent years, leading to the reappearance of waterfowl and wetland vegetation.

The broader area of the lake has been inhabited since the Early Palaeolithic Era (30,000–8,000 BC). For centuries, the rich natural habitat supported more than a thousand fishermen and their families. The largest lake in the country, it was also a hunters’ paradise, hosting the largest number of bird species in Greece and, in the mid-20th century, the second largest in south-eastern Europe after the Danube Delta. The lake supported the socio-economic life of many villages, and not just those found by its shores. Ever since the restoration works, new important archaeological finds have continued to come to light.

It became apparent soon after the drainage operation that the environmental equilibrium had been seriously distorted. The fields that replaced the former lake were not productive and the results were generally disastrous. The local fishing economy was destroyed, aquifer levels dropped, salt water intruded into and salinated the fields, which were progressively abandoned, and wastewater—formerly filtered by the lake—ended up flowing untreated into the sea. A few years ago, the government decided to restore Karla. The very high cost of doing so was covered in part by the EU, but the re-flooded lake resulted in a reservoir-like structure and the project faced a number of environmental and management obstacles. However, many of its lake functions have since been restored and fish and waterfowl have returned to Karla.

Lake Karla hosted an invaluable culture heritage related to fishing. More than 1000 fishermen had developed a unique way of life focused on the lake, with temporary fishermen’s huts housing the fishermen during the fishing season and a unique traditional heritage related to fishing methods and tools. Lake Karla was a significant resource provider during World War II, when it supported the entire population of Thessaly with fish. The draining of the lake brought the fishermen’s traditional way of life to an abrupt end, and the former fishermen either became farmers or left to seek manual jobs in urban centres.

Taking stock of the rich natural and cultural heritage of the site, the managing authority is planning to develop the local tourism industry through cycling routes, viewing and recreational points and a museum.