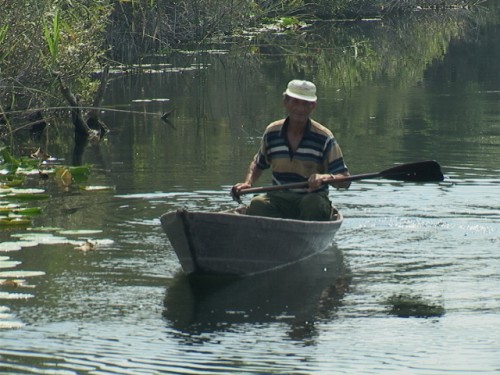 Situated in southern Herzegovina, Hutovo Blato is a natural reserve covering four major lakes—lakes Deransko, Jelinsko, Svitavsko and Skrkino—all of which are connected by the Krupa River. The Krupa is the only river in the world that flows in both directions: it carries waters from the lake to the Neretva River, but when the water level in the Neretva River is high, it carries water back to the lakes, leading to the flooding of the surrounding lands. Due to its morphology, Hutovo Blato, and its upper zone in particular, is relatively well protected from human impact and is therefore a significant habitat for plant and animal species. The geomorphology, climate, vegetation and abundance of water have created an ideal environment for the wintering of ducks, waders, herons, cormorants, coots and many other birds which arrive here from northern Europe. In 1979, the large Svitavsko Blato marsh became a 1200 ha water storage lake following the construction of a hydro-electric power plant. This has caused a major deterioration in the environment, resulting in a significant reduction in bird and fish species.

Numerous carved and engraved stone funeral monuments (steak/stecci) are scattered throughout the canton of Herzegovina-Neretva. These are attributed to the Bogomiles, a Christian sect whose followers inhabited the area between the 13th and 16th centuries. The ancient symbols engraved on the monuments are all connected to the earth, family, sun, moon, tribal warriors, dancing and giving praise to the gods.

In the past, agriculture was one of the economic activities locals depended on for their subsistence. In order to cultivate the land, they drained the marshes and transformed their surroundings by digging channels.

Fishermen used to make a special kind of boat, the trupa, a practice which has unfortunately been abandoned. Water abundance and the connection to the sea through the Neretva and Krupa River has resulted in the development of very rich fish stocks.

Before the Bosnian War, Hutovo Blato was a famous tourist attraction for travellers and pilgrims on their way to Mostar and Medugorje. They often stopped off here for a photo-safari and to relish nature along with the renowned local cuisine. In order to counterbalance the damage caused by the war and to preserve what was left of the wild game, fish and birds in the Park, the Hutovo Blato National Park was founded in 1995. Local archaeological sites continue to attract visitors to Hutovo Blato, as do cultural activities such as the summer Caplina Festival.