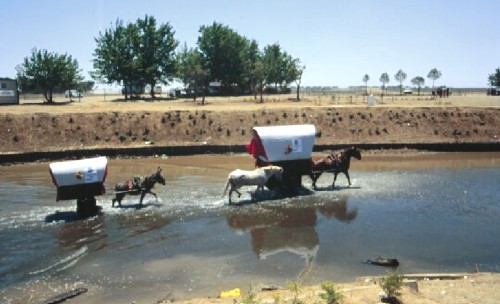 Its strategic location between Europe, Africa, the Atlantic Ocean and the Mediterranean Sea makes the Marismas de Doñana a key wetland on a global scale. In spite of the transformations it has been subject to over the last 80 years especially, a large area remains in good ecological condition with a very high biodiversity. Within Andalusia, Doñana occupies a large part of the estuary of the Guadalquivir River or Rio Grande, which articulates the entire region. However, it is subject to pressure from adjacent mass tourism developments. The area is also threatened by desertification caused by a depletion of aquifers caused by excessive extraction for the irrigation of intensive cultivations. The threat of pollution is also apparent.

This wetland has been inhabited since antiquity and was known as Lago Ligur during the Hispano-Roman period. Opening onto the Gulf of Caãdiz, Doñana was colonised by peoples from far-off lands including the Phoenicians, Romans, Arabs and Vikings. In the 20th century, foreign companies—mostly British—established themselves in the area, contributing to its rich cultural traditions. Locally, the area is better known as the Marismas del Guadalquivir and by the names of various sub-areas (such as Isla Mayor, Marisma Gallega, Marisma de Hinojos, Isla Menor, La Madre, Las Nuevas, Rincón del Pescador, Los Caracoles), which are integral to local traditions.

The relationship between the sandy beaches, marshes and surrounding terrestrial zones, on the one hand, and the exploitation of their resources, on the other, gave rise to various traditional activities such as the collection of local materials (such as reeds), the grazing of animals, fishing, hunting and extensive agriculture. Local people tended not to specialise, but to carry out complementary activities. The habitation pattern includes permanent small villages at a safe distance from the marshes (to avoid flooding) and temporary constructions on the beaches.

The Virgin Mary of El Rocío is celebrated in El Rocío, a village situated among beaches and marshes. In the past, the site was a magnet for large numbers of inhabitants from the broader region, but more recently thousands of people from all over the country have started participating in the pilgrimage and the festivities. Included in the celebrations is a procession through the Doñana National Park to the village of El Rocío.

A number of key issues are evident in this important site. Principally, perhaps, there is the role a living religious and social tradition, centred on El Rocío, can play in the conservation and management of a wetland with high biodiversity. Efforts to establish a harmonious relationship between the two in Doñana may provide useful lessons for other Mediterranean sites.