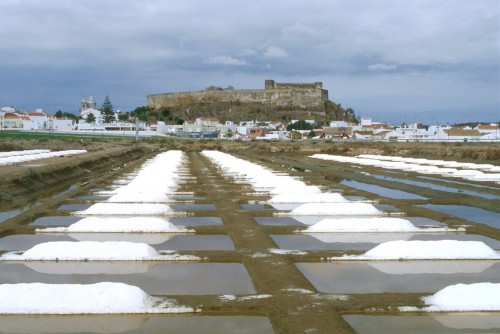 Castro Marim is located in the south-eastern corner of Portugal, very close to the Spanish border and alongside the Guadiana River. The wetland is a complex of salt marsh, saltpans, creeks and dry areas of schist soils, red clay, arenite and sand; there are also man-made salinas on the western side of the river. This unique environment makes the area ideal for the concentration of many species, most of which bear evidence of strong saline influences and adaptation to a long, hot, dry summer. The wetlands play an important role in sustaining the balance of underground water tables in the region as well as moderating the disastrous effects of river flooding and helping retain fresh water in one of Portugal’s driest areas.

The wetland bears cultural evidence of a plethora of civilisations. The remains of the first settlements date from the Neolithic Period (approximately 5000 BC). At that time, the fortification itself was much nearer to the sea than it is now; according to geological research, it was an island surrounded by sea.

As a port offering shelter to ships sailing up the Guadiana River transporting copper mined at Alcoutim and Mértola, the site contains traces of a Phoenician and Roman presence. Besides its strategic riverside position, Castro Marim was also connected to Lisbon by a Roman road which ran parallel to the Guadiana, increasing its importance still further. During the period of Moorish rule, the site was fortified and the foundations laid for the present structure. The fortified wall that surrounded the medieval town on top of the hill must date to the 13th-14th centuries. Castro Marim served as the headquarters of the Order of Christ during the reign of King Dinis (1261–1325).

The saltpans bordering Castro Marim are centuries old and locals have exploited them for hundreds of years using traditional methods for the extraction of salt. The majority of the salt flats is natural, but vast areas were transformed to profit from the commercial production of salt in more recent times. In addition, many traditional salinas have been converted into fish farms, which poses threats to the integrity of the site.

In the past, locals were also employed in local potteries producing tiles and bricks, in tidal- and wind-powered mills, lime fabrication, handicrafts, traditional land cultivation and fishing.