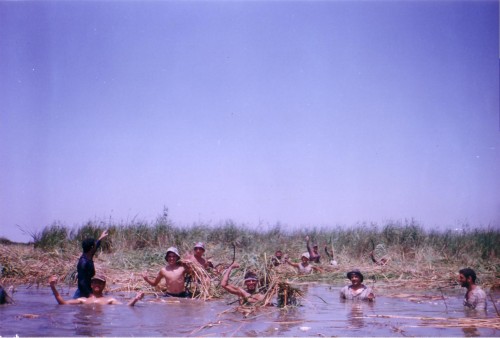 Burullus Lake is situated in the north of the Nile Delta. It covers an area of 20,000 ha and is 65 km long. A narrow sandbar separates it from the Mediterranean Sea. Before the construction of the Aswan High Dam, the lake received the Nile floods in late summer and autumn. The lake includes a noteworthy number of environments, with swamps and sand plains prevailing, and constitutes an ideal habitat for 135 land and water plant species as well as an important stop-over point for migrating birds. The area is densely populated, with approximately one million people living around the lake. Social studies revealed that approximately 185,000 people interact with the lake on a daily basis.

Fishing is very important for the local people. The traditional boats—markebs and faloukas—are still used. Fishermen use traditional techniques (various kinds of nets) as well as taking advantage of the reeds. Unfortunately, many illegal fishing methods are also currently practiced. In the past, local fishermen would make their own fishing nets as well as ropes out of their old nets.

Waterfowl hunting has been a constant in Egypt since the Dynasties and the frescoes on the walls of old Egyptian temples signify the economic importance of birds. People used waterfowl for food, decoration, medicine, education, domestication, sport and religion. At present, wild birds are still shot and trapped throughout Egypt’s wetlands and deserts. There are two types of waterfowl hunting: commercial and sport hunting. Many locals, mostly fishermen, hunt waterfowl during the winter months especially, when birds are abundant around the lake. They either kill the fowl or trap them alive and sell them to middlemen either locally or in city markets. Sport hunting is practiced for pleasure and the hunted birds are consumed by the hunter’s family and friends. This activity is organized by shooting clubs based in Cairo and Alexandria that hire lakes from the local governorates and use them as hunting reserves during the winter months.

Use of other wetland natural resources

Reeds are abundant in Burullus Lake and locals harvest and them into mats which are used in variety of purposes in the nearby community.

Burullus occupies the northern part of the Kafr El-Sheikh district, which was the centre of worship for the god Amun-Re. The ancient city of Xois, which stood on the site of what is now the village of Sakha, was capital of the 6th Lower Egyptian nome (an administrative area). The Sanctuary of the Church of the Virgin Mary is located there. It is alleged that the child Jesus left his footprint as a bas-relief in a rock during a journey through the Delta with the Holy Family. The rock was kept hidden for many centuries to protect it from theft and was unearthed again around the end of the 20th century.