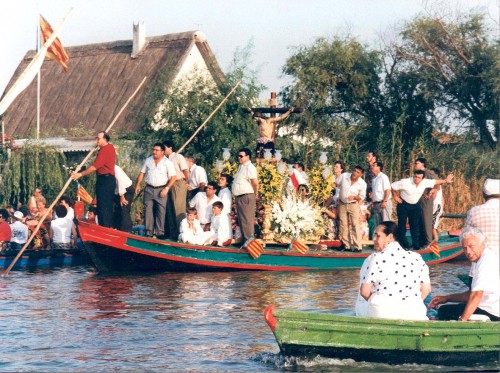 Albufera de Valencia is a large coastal lagoon in the western Mediterranean, 16 km south of the city of Valencia. The lagoon is fed by streams, rivers and irrigation channels and is separated from the sea by a wide, 30 km long sand dune peninsula. Two thirds of the site is used for rice cultivation. The diversity of its habitat is complemented by the untransformed part of the lagoon whose extensive reed-bed islands and fringe, salt marshes, dune systems and seashore are home to many endangered and rare plants and fish species. More than 250 bird species find shelter in the lagoon sporadically or regularly, with 90 breeding there and large numbers of waterfowl staging or wintering there. Taking advantage of their unique environment, the inhabitants have adopted exceptional methods for using local natural resources in a sustainable way. This is evident in the local centuries-old agricultural, fishing and hunting techniques, many of which continue to be practiced to this day.

The region bears witness to millennia of human habitation. Before the arrival of the Romans in the area, the area was inhabited by the Iberian peoples, who were later succeeded by the Greeks, Romans, Visigoths and Moors. Archaeological finds and historical sources indicate that the region was heavily Romanised. However, the Moors would have an even greater influence.

In Roman times, Albufera was the most productive agricultural region in the known world. The Arabs introduced the cultivation of rice during the 15th century, and 120 million kilos of rice a year are now grown under the umbrella of the Regulatory Council of the D.O. Arroz de Valencia guarantee of origin. Several varieties are grown, all of which are ideally suited to the conditions in La Albufera Natural Park. Traditional rice farming is a laborious process carried out in four stages: preparing the land, sowing, hoeing and harvesting. The fields are prepared with fertilizer in February and flooded in April. The rice seedlings are then set in a uniform manner throughout the field, planted in straight lines with the workers moving carefully to avoid stepping on the newly planted seedlings. The fields are hoed during the summer months, and the rice is harvested in September.

Since prehistoric times, rich fish catches have attracted people to the area. The Moors also exploited the fish wealth of the lagoon. After the Reconquista (the historical process by which the Christian kingdoms of the Iberian peninsula sought to wrest control back from the Moors between 722 and 1492 AD), the various monarchs of Aragon and Spain collected one fifth of all fish caught in the lake. Today, there are just 400 fishermen left on the lake; they still follow tradition and draw lots on the second Sunday in July for their calaes (fishing grounds).

The Moriscos—Moors converted to Christianity during the reign of Jaime I—were responsible for the design of the high-peaked cottages known as barracas which are built using materials from the wetland. Barracas are characterised by their steeply-sloping roofs, which are thatched with two layers of densely-packed reeds, and by their low side walls (it is believed that people did not sleep in beds during this era, preferring to sleep on the floor). Although the oldest surviving barraca in the Albufera is just 150 years old, its design has not changed and includes the small cross at the apex of the roof, which indicated a Christian house during the period of Moorish rule.

Paella, the famous Spanish dish, originated in Valencia; well-known worldwide, it is the jewel in the crown of the local gastronomy. The combination of Valencian rice and fresh, locally-grown vegetables make this a truly superb dish. Perch, grey mullet and bass, the main catch from the wetlands, but also the anguilla, the freshwater eel which is the pearl of the lagoon, can be found in every local restaurant in the form of all i pebre, a rich stew in which a paste of almonds, garlic, saffron and parsley are blended into the eel stock.

The water-borne pilgrimage of El Cristo de la Salud, also known as El Cristo de la El Palmar, only began in 1974, when it was introduced by the local church, but it has become very popular in the surrounding towns, as well. The pilgrimage takes place in the La Albufera coastal lagoon, in the district of El Palmar in Valencia, and blesses the waters to ensure good catches all year around. On the 4th of August, the crucifix is taken from the local church and ferried across the lake in an impressive procession of flower-covered boats before being returned to the chapel. The festival climaxes with fireworks on the water’s edge and celebrations in the streets.