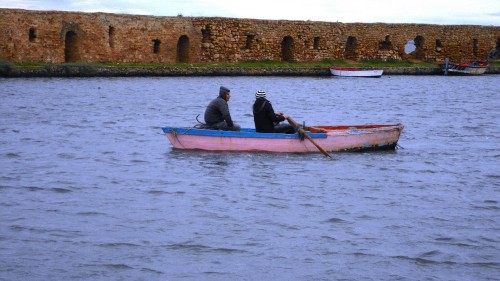 Ghar el Melh Lagoon is situated 30 km southeast of the town of Biserte in Tunisia. The village of Ghar el Melh (formerly Porto Farina) is built on its southern bank. It is bordered by marshland on its southern and western sides and communicates with the sea on its eastern side. A 6 km long sandbar separates Ghar el Melh from the Mediterranean Sea. To the north, it adjoins the region of Djebel Nadour. Drainage channels have been constructed on its western side.

The region has a lengthy history. First inhabited by Phoenicians, being strategically important, the area was later conquered by, among others, the Romans, Vandals, Byzantines, Arabs, Ottomans and French.

The presence of the ancient port indicates the significance of its strategic position down the centuries. In the village of Ghar el Melh, the very well-preserved 15th-century Spanish fort is a magnificent part of its heritage, as are the Turkish fortresses, the old bathhouses and the 17–18th century prisons.

The cultivation of lake shores depends on the level of humidity in each place and on the quantity of soil deposited by the annual floods. The way fields are cultivated in this region (pieces of land virtually floating above the lake) has allowed many families to inhabit the shores throughout the wetland. A draining system is in use for the agriculture on the banks and in the marshes.

Fishing has always been important for the local population and the inhabitants around the lake have developed several fishing techniques, tools and boats to serve their needs. The old port of the village is now almost abandoned and used by only a few fishermen. The traditional boats have to some extent been replaced by motor-boats and aquaculture is being developed.

An important religious practice for the people of Ghar el Melh village is the visit to their spiritual leader, the Marabout Sidi Ali el Mekki, whose home overlooks the entire wetland.

The unique landscape of the lake has inspired many artists. Recent years have witnessed a constant increase in the number of photographers taking part in an annual photography festival held in the area. The restoration of the region’s forts and other monuments has made it easier for visitors to explore this area, which is so rich in both traditions and biodiversity.