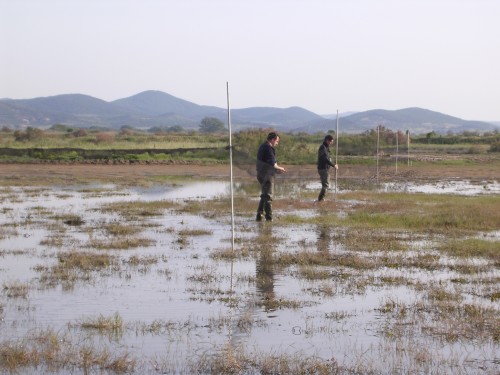 The Evros Delta is situated in north-eastern Greece on the border with Turkey. It is considered one of the most important wetlands in Europe, due both to its strategic position and its ecological value as a significant stopover point for migrating birds. The region hosts 108 species listed in Annex I of the Birds Directive, some of which are threatened worldwide.

Human intervention, especially during the 1950s-1980s, altered the landscape dramatically. Dams, canals, dikes, flood control and irrigation projects served the needs of the local population for arable land while at the same time degrading the wetland and leading to the extinction of certain fish and bird species. Despite the disastrous effects of these interventions, farmers in the lower (southern) part of the wetland did not benefit from the new lands due to the high salinity of the reclaimed soils.

The area has always been a cultural crossroads influenced by Greeks, Romans, Byzantines, Franks, Bulgarians and Turks and has developed a particular cultural character as a result. In close proximity to the Delta, on Doriskos hill (inhabited from Neolithic to Hellenistic times), the Persian king Xerxes built a fortress so large that, according to Pliny, it could accommodate 10,000 men. The Roman settlement of Traianoupolis was established by the emperor Trajan during the 2nd century AD. Its strategic location close by the thermal springs and the Via Egnatia which connected Rome to Constantinople turned the town into a transit station.

The church of the Virgin Mary Cosmosotiras, built by Isaac Comnene in the 12th century, is the most significant Byzantine monument in the whole of Thrace. The domed bathhouses on the site of Roman Traianoupolis were built in the 16th century. The thermal springs have been attracting visitors since ancient times and are still in operation.

Fishing is a traditional activity still practiced in the region. It is carried out using traditional methods and equipment that have not altered considerably in recent decades. The local boat used—the blava—has no keel and is made of wood. The main fishing methods used are the traditional nets, trawl lines and fish traps. There are three fishing reserves within the Delta area; one—Paloukia—is actually a lagoon which continues to function as it did in the past.

The region has witnessed a remarkable growth in ecotourism in recent years. Guided tours and boat trips are organised, while visitors can call in on the Evros Delta Visitor Centre to acquire informational material about the wetland and visit the related exhibition. The Centre also takes care of wounded birds brought in by locals, feeds birds in the Delta area during winter, and plays an active role in local events. Finally, it monitor both birds and water quality, wardens the site in co-operation with the responsible authorities, and manages vegetation (tree plantation etc.). Folklore and religious activities take place in the surrounding villages throughout the year and attract a large number of visitors.